React Js is a javascript library used to create stateful, responsive, and single-page web applications. React Js is developed and maintained by a team of developers at meta. It is a free and open-source library.

2. What are the important features of React?

The important features of React are:

3. What are the advantages of using React?

An event performs an action based on user events.

Events are written in camelCase syntax in react. Example: onClick.

5. What are States and props?

A state is a built-in object used to manage data and contain data for components. A state can be defined in two ways inside "Class" and inside "Constructor".

In React Js data always flows unidirectionally. A Props is a short form for properties. In react, js props are used to pass data from one component to another. As react is uni-directional props are passed from Parent component to child components.

Components in react js are basically a set of code that renders UI, adds functionality to UI & manages changes in DOM.

JSX is a syntax extension to javascript. React recommends it for creating UI. It allows us to write HTML inside JavaScript and place them in the DOM without using functions like appendChild( ) or createElement( ). It is not necessary to use JSX, but it is more useful as it shows more errors and warnings.

8.  What are the different phases of the component lifecycle?

Three phases of the lifecycle of components are Mounting, Updating, and Unmounting.

Conditional Rendering works the same as conditions work in other programming languages. Condition rendering, we render depending on some condition. For example, handling the login/logout button. There are 3 ways to do conditional rendering: if, ternary operator, and logical && operator

10. What are three types of Conditional Rendering?

There are 3 ways to do conditional rendering: if, ternary operator, and logical && operator

11. What is a list in React? Explain with example

Forms allow the user to interact with the web pages and gather information from the user. Forms can perform many tasks such as authentication of the user, adding users, searching, filtering, etc. A form can contain text fields, buttons, checkboxes, radio buttons, etc. There are two types of form input in react: Uncontrolled and Controlled.

Routing is a process of directing users to the next page or different pages depending on their actions.

A router is used to develop Single Page Web Applications. The router is used to build multiple routes in the application and when a user types a specific URL into the browser, and if the URL matches any route the user will be redirected to that particular route.

16. What is React-router-dom? How to install using npm?

React-router-dom is a reactJS package that plays an important role to display multiple views in a single-page application.

17. What are React Hooks? How to install react hooks?

Hooks are added to react in the 16.8 version. Hooks allow function components to access state and other react features without using class. They are functions that "Hook" into react state and lifecycle feature.

There are 3 rules for hooks:

19. What is React useState?

20. What is React useEffect Hook?

21. What is React useContext Hook?

22. What is React useRef Hook?

useRef Hook is used for preserving values between renders. It can be used to access a DOM element directly. If we tried to count how many times our application renders using the useState Hook we can be caught in an infinite loop so to solve this we use the useRef Hook.

23. What is React useReducer Hook?

24. What is React useCallback Hook?

Developers can create their own hooks called custom hooks. Two rules for creating Hooks are: Custom Hooks are named with "use" as a prefix and Custom Hooks consist of built-in React hooks.

Redux is an open-source JavaScript library. It is used to manage the application state and used to build the user interface. It is introduced by Dan Abramov and Andrew Clark in 2015.

It requires to react 16.8.3 or the latest version. 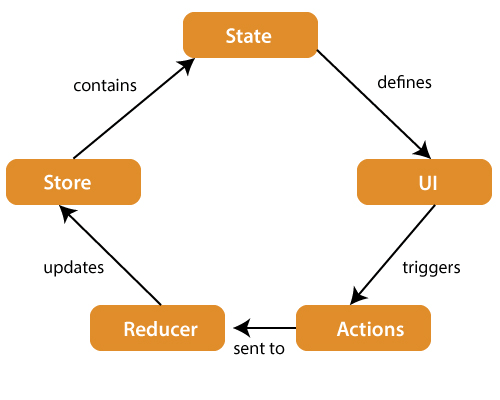 The store is an unchangeable object tree in Redux. It is a state container holding application's state. Redux can only have a single store in the application and it needs to be specified with the reducer. A reducer is to return to the next state of the app.

31. What is Action in React redux?

Action is a JavaScript object that has a type field that indicates the type of action performed. Action creator is a function that creates and returns an action object. It is used to write clean code and helps to achieve reusability.

Redux Testing uses JEST as a testing engine. We can use vitest as a test runner if we are using vite to build a project.