Hello, Welcome to our Django Tutorial. In this tutorial, we’ll cover everything about Django from basic to advanced. Before coming to the topic we hope you already have basic knowledge of the python programming language if you want to revise the concepts of python click here.

Django is a Python-based web framework that allows us to create and maintain quality web applications in a less complicated way. Django is easy to learn because of its built-in features like - Built-in admin panel, default databases, etc. By using Django we can create web applications in very less time.

Adrian Holovaty & Simon Willison created Django in the year 2003 While working in the Lawrence Journal-world newspaper when they started creating a web application using python. Django was officially released on 21, July 2005. Django is now an open-source project with a large community across the world.

Step-1 Installing Python
Django is fully written in Python so before installing Django first we have to install python in our system. To download python on your system click here.
If you are using Linux or Mac OS your system probably has python installed. Do check it before installation.

Step-2 Installing Code-Editor
There are a lot of code editors available. In this tutorial, I will use VS Code. To download VS Code click here.

Step-3 Installing Django
You can simply install Django by going to this website (https://www.djangoproject.com). You can install Django according to your OS. But in this tutorial, I will use a windows terminal to install it. Follow the steps given below to install Django.

By doing this Django will get installed on your system.

So, we have successfully installed Django to our system now, the next step we have to do is create a Django project. Use the following command to make your first Django project.

After using this command a new folder will be added inside your project folder with some In-built files like:

Now, a new folder with your app name will be added inside your project folder with some In-built files like -  __init__.py, admin.py, apps.py, models.py, tests.py, and views.py.
Now, we have to add our app to project-installed apps. For this open your project’s setting.py file and add your app in the INSTALLED_APPS section.

Another thing you have to do is click on your app and create a urls.py file inside your app.

After setting up all the basic things, let's test if our project is working or not. For this use the following command. 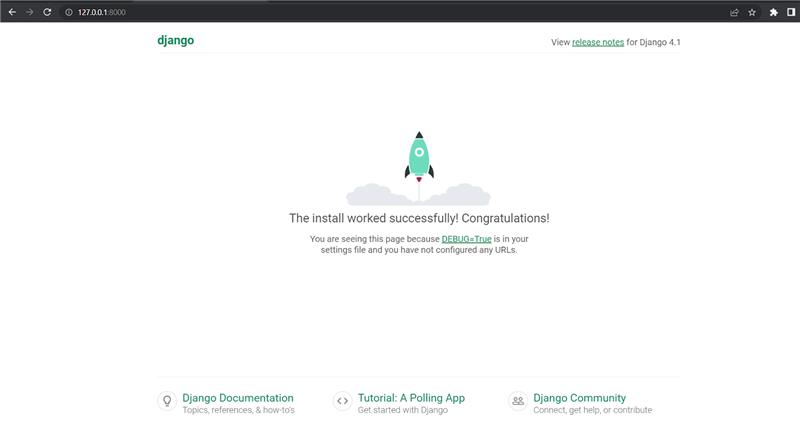 BOOM! Our Project is working.